Traditionally, chowder is a thick, hearty soup generally made with seafood, salt pork, vegetables and milk. But for all of their warmth and flavor, most chowders are quite high in fat and calories. For a low-calorie change, try this Light Albacore Chowder, an adaptation of the New England classic. While retaining all of the flavor of a traditional chowder, this recipe has only 397 calories and 12 grams of fat per serving — and it’s a meal in itself!

Rinse Albacore with cold water; pat dry with paper towels. Cube fish; set aside. In medium saucepan, mix broth with 1 can of water. Place Albacore in steamer tray over broth and steam 2-3 minutes. DO NOT OVERCOOK! Albacore should be pink in center when removed from heat. Set Albacore aside. Strain broth into large saucepan. Add potatoes and simmer until tender. Remove cooked potatoes from broth, reserving liquid. Puree cooked potatoes with 1/4 cup broth. Return with remaining broth to pot. Add thyme, basil, and vegetables. Simmer until vegetables are almost tender. Before serving, stir in Albacore and milk and heat to serving temperature without boiling. Sprinkle with parsley just before serving. 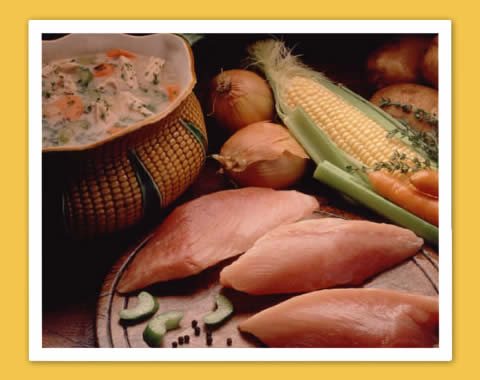